The Illinois Appellate Court recently threw out a lawsuit brought by a chainsaw wielding plaintiff who was injured in trimming a neighbor’s tree without permission. Lee v. Lee, 2019 IL App (2d) 180923. Aside from its amusing facts, the Lee decision will be remembered for two reasons: (1) the court applied the open and obvious defense to an ordinary negligence case; and (2) the court, on its own initiative, took the rare step of holding that the plaintiff’s own contributory negligence was greater than 50%, which precluded recovery. 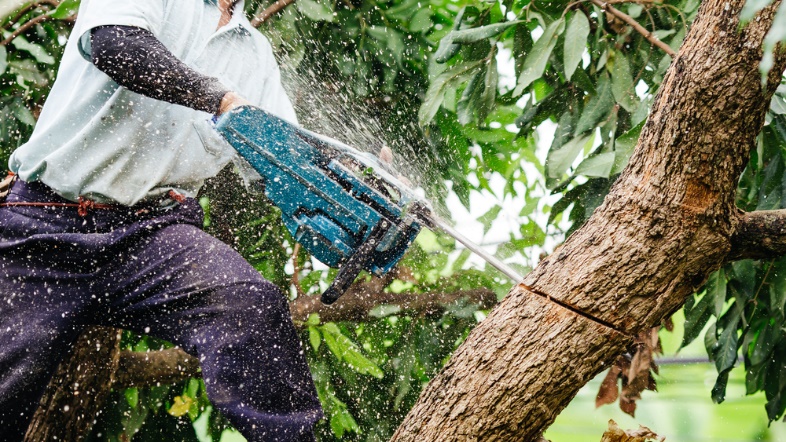 The plaintiff in Lee, Kun Mook Lee (“Kun”), and the defendant, Young Rok Lee (“Young”), were fellow churchgoers. One day, Kun and the church’s pastor went to Young’s home to trim an overgrown tree limb. Young had never asked for their assistance. In fact, he had specifically asked the two men not to come because the tree was too large and too high to trim safely.

Kun and the pastor were not deterred by the tree’s treacherous height. However, the two could not reach the limb with a normal ladder. So, they fastened two small ladders together with wire. Kun then leaned the jerry-rigged ladder against the very tree limb that he sought to cut. Ignoring the safety risks entirely, Kun climbed the ladder and cut the limb—which was supporting the ladder. When the supporting limb fell, so too did the ladder and Kun. Kun sustained life-threatening injuries as a result of his fall.

Curiously, Kun then had the gall to sue Young for negligence. Young defended on the basis that Kun was injured by an “open and obvious” condition. The trial court agreed and dismissed Kun’s lawsuit.

Kun appealed, but the appellate court affirmed the dismissal on two grounds.

First, the appellate court agreed that Kun’s injury was caused by an “open and obvious” condition. Kun tried to assert that the “open and obvious” defense was unavailable, as it has traditionally been applied in premises liability cases and his complaint sounded in negligence. The court found that the open and obvious defense did apply in negligence actions. In so ruling, the court conclusively foreclosed on other plaintiffs’ ability to make similar arguments in the future.

After finding that the open and obvious defense applied, the court then held that it barred Kun’s claim. No reasonable person would have failed to appreciate the obvious danger of tying two ladders together, placing the franken-ladder against a tree limb, climbing it, and cutting the tree limb the ladder was resting on. Thus, Kun’s lawsuit could not proceed.

Second, the appellate court took the rare step of dismissing Kun’s lawsuit on grounds not argued by the parties. Specifically, the court held that Young had no legal duty to Kun because of his “freakish” and “bizarre” behavior. Indeed, Young would not have reasonably foreseen that Kun would trespass, tie two ladders together, place them on a tree limb destined to be cut, and become injured after chainsawing the limb. Similarly, the court found that no reasonable jury would conclude that Kun’s own conduct was not at least fifty percent of the cause of the accident. As a matter of law, therefore, Kun’s lawsuit had to be dismissed.

The Lee decision demonstrates that Illinois courts will not tolerate “freakish, bizarre, and fantastic circumstances” where a plaintiff tries to recover for self-inflicted harms. Further, Lee gives defense counsel ammunition to argue that the open and obvious defense applies in run-of-the-mill negligence actions. Thus, Lee will be remembered even after its chainsaw wielding protagonist is forgotten.